*This project is co-designed by Dominique Luster and Samantha Ticknor

This project seeks to build upon the rich history of the Teenie Harris archival collection and develop new opportunities for computer-generated creation and computational manipulation of collection metadata that is both produced and used by the African American community and the Carnegie Museum of Art. This project aims to develop and document the service and use capabilities and limitations of machine learning, text parsing, and computer vision technologies to make meaningful contributions to archival metadata. The public facing deliverables will combine the notion of creators and users of the Harris data and will result in a suite of web-based in-gallery interactives that have the functionality of engagement with and contribution to the collection as data.
Artificial Intelligence and Machine Learning for Metadata Creation
Summer 2018

*This project is in collaboration with Caroline Record, Golan Levin, and Carney.

From 2001-2011, the Teenie Harris Archive created metadata for 71,988 individual object records, by hand. This is extraordinary by any standard. However, those records were created by dozens of professional and para-professional staff, over the course of a decade, which has resulted in strikingly “dirty” data and little standardization. The titles are, in fact descriptions; the subject headings are more akin to keywords; and names of people are free-text soft data.

This project would seek to develop a more nuanced and user-oriented level of access to the Teenie Harris collection; which could, in turn, be applied across the museum to similar medium collections. If successful, this work could substantially decrease metadata backlogs for archival and curatorial collections, using machine learning, revolutionize the field.

Objectives
***The public Github Repo on this project is available at: https://github.com/cmoa/teenie-week-of-play​ 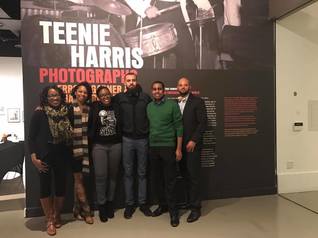 In 1770, Crispus Attucks, a black man, became the first person to die in the pursuit of American independence. Attucks served as a model for centuries to come, as black men and women fought in armed positions when white Americans felt threatened by outside enemies. Indeed, African Americans often fought and died abroad for a country that marginalized them with segregation and Jim Crow laws at home.

Black Soldiers Matter. And their unique experiences frame the conversation of this exhibition. During the 1940s, Charles “Teenie” Harris photographed over 1,500 soldiers in his studio, located on Centre Avenue in Pittsburgh’s Hill District; these portraits were his contribution to the war effort. As a photojournalist for the Pittsburgh Courier, Harris also captured the realities—points of pride and points of sorrow—of a “separate but equal” service to one’s country.

Here we balance three voices, each with their unique insights. Teenie Harris, the photographer observing and documenting African American life. Eugene Boyer, Sr., a veteran of World War II and Korea. Lance Woods, 60 years Boyer’s junior, a veteran of Iraq and Afghanistan. Each of their unique perspectives is woven into a shared history.


Teenie Harris Photographs: Erroll Garner, and Jazz from the Hill
Carnegie Museum of Art, Dec. 17 - July 28
​
The time period from 1935 to 1960, often considered the golden age of jazz, was a pivotal moment in American music history, particularly in Pittsburgh. It was when the Hill District, a neighborhood that Harlem Renaissance poet Claude McKay once referred to as “the crossroads of the world,” became a vital destination for jazz musicians from across the country. Teenie Harris Photographs: Erroll Garner and Jazz from the Hill celebrates the social and cultural history of this era by focusing on the work of jazz pianist and composer Erroll Garner (1921–1977), who alongside close friends and collaborators such as Billy Eckstine, Leroy Brown, Stanley Turrentine, and Dizzy Gillespie helped define the sound of a generation while performing in venues like the Crawford Grill and the Hurricane Club. Check out images of the exhibition HERE!

#BlackLibrariansMatter
Within the limited parameters of this project, I am investigating the community and culture of Black Librarianship in American. In addition to investigating cultural micro-aggressions and internal conflict structures, I give particular emphasis to the recruitment and retention of students of color into the profession. This work continues an important conversation begun by Dr. E. J. Josey of the University of Pittsburgh.  More information about this project will be available shortly.

Down the Rabbit Hole: Tracing the Provenance of unsigned 17th cen. Italian Drawings
With the help of University of Pittsburgh Frick Fine Arts Library and Art Gallery, I am conducting provenance research on a unbound sketchbook which contains approximately 230 sketches and drawings. Little is known of the collection expect for its approximate date of origins and its latest transference of ownership. I am seeking to provide the University Art Gallery and its staff with a comprehensive history of the object while enhancing my own skills in research and reference methodology. You can follow my Field Notes & Progress HERE.

Power and Silenced Identities as Evidenced in Biased Appraisal Practices
The purpose of this project is to assess how the appraisal of certain records over others is an assertion of power and how these decisions affect the master narratives of our society along with contributing to the silencing of certain individuals. I argue that It is my understanding that (1.) Information, like power, does not exist within a vacuum. If this is true then it is also understandable that (2.) archives are social constructs of power. And if archives are considered constructs of power then (3.) certain narratives tend to be privileged while others are marginalized. Therefore if archives are indeed social constructs of power that tend to privilege and marginalize certain narratives then it can be concluded that archives, and by virtue, archivists wield enormous power over the shaping of identity, memory and the production of history.